With a weekend off, we'd headed SW to a housewarming party held by a couple of friends of ours (Suzie and James), who recently purchased an old church just down the road from another friend (Joe). Now, you all know how much of a hermit I've been the last couple of months, and I've been avoiding parties like the plague.  Neither Don nor I are particularly good with parties where we don't know a lot of people.  So... when we heard that Joe was sick as a dog (leaving the party hosts as the only two people we'd know there), Lyssy might have had a wee bit of a panic attack...  But, we'd said we'd go, we wanted to support our friends, and we wanted to see this beautiful space they'd been lusting after for over a year -- so, I pulled myself together, and we headed down the highway with our jammies and pillows in tow.

And we're so glad we did!  Oh sure, we didn't know anyone when we arrived, but Suzie's and James's friends are all so wonderful (to be expected, as they're wonderful people themselves), we felt right at home.  And we'd made a lot of new friends by the time we'd left -- including one beautiful canine friend who fell totally in love with Don (can't blame her, really!), and visited our bed several times overnight to give him kisses (when she wasn't trying to crawl into bed with James).

So... I shall pat myself on the back and say that a major introvert taking herself to a party where she knows no-one is pretty darned awesome, especially following two months where going to the grocery store caused panic attacks.  Yay me!

But on a more general level, pushing yourself outside your comfort level is awesome.  I do know this, I have lived it many times, but... guess the universe decided I really needed a reminder to take some chances and leave my home base more often.  Fling myself on the mercy of happenstance.  Be rewarded for my bravery.  Yes, I know people have been telling me how brave I am for years, but I tend to keep being brave in the same areas -- this was a whole different type of brave, and the fabulous weekend and new friends it brought me were... say it with me now: Awesome.
*********************************
And it's a new year!  Don and I both did a 2012 wrap-up, and planned ahead for 2013, including picking each of our "official" words for the year.  Colour me crazy, but I chose the word: Daring.

Daring.  Guess I started the year right, then, daring to go to that party.

Daring is Awesome.  Try it, you'll like it!
***********************************
Our dryer and gas valve have both been fixed, for not too much money, which means we should no longer be going downstairs and discovering our appliances on fire.  Which may seem like I'm scraping the bottom of the barrel for something good to say about this week, but it truly is awesome to have one less worry on my mind as I attempt to go to sleep at night.  So lack of spontaneous combustion in our basement counts as Awesome.  Yessirreee.
**********************************
But the best has been saved for last.  Because earlier last week, we received a "thank you" card from our (awesome) friends Debbie & Mitchell for the gifts we'd brought for their baby shower last month.  Inside this card was this incredible picture of their daughter, at six weeks. 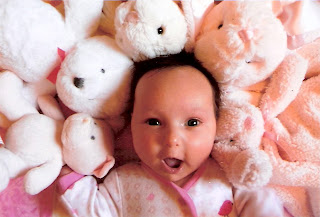 Now, Debbie's not a professional photographer, and she just took this adorable pic on her cell phone -- which kind of makes you think she should go into baby photography, no?

The surprise and love and sheer joy on this little girl's face just makes me want to giggle and play with her all day.  The photo is on our kitchen bulletin board, so I can't walk through the room without taking a peek and getting a big smile on my face.